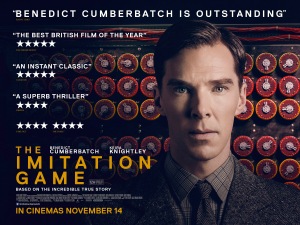 “I know it’s not ordinary. But whoever loved ordinary?”

Of this year’s eight nominees for the Best Picture Academy Award, half are biopics, or at least, based on real events. While Selma takes Martin Luther King’s life and distills it to one crucial chapter, The Theory of Everything gives us decades of the life of Stephen Hawking. And American Sniper is all about one aspect of one man’s life. But The Imitation Game stands out from these in the way it gives a bit of everything. It’s the story of a man’s life, it’s the story of a world changing event, it’s several chapters that can be seen to represent a whole. It is The Imitation Game.


Cutting back and forth between three periods of the man’s life, this is the story of Alan Truing (Benedict Cumberbatch). The main story covers Turing’s involvement in breaking the code of the Nazi’s infamous Enigma machine. Breaking Enigma means intercepting and decoding every important Nazi military communique. It also means winning the war.

A mathematical prodigy, everything Turing has in intelligence, he lacks in social skills. He alienates co-workers and military superiors, but his groundbreaking, if also a little unorthodox work, always pays off just in time to keep him employed. And in the 40s, there was nothing more unorthodox than hiring a lady of the female variety to do man’s work, like sums. But he does it anyway, when he recognises the raw maths genius of Keira Knightley’s Joan Clarke.

In flashbacks, we see a young Turing (Alex Lawther) being tormented at boarding school for being different. He’s smarter than the others, but it’s more than that. He simply doesn’t fit in. When he meets his one true school friend, the reason for his differentness is made clear. He’s gay. And in 1920s England, that wasn’t the done thing.

Flash forward to the post war years, and it turns out that being gay in 1950s England still isn’t quite tickety boo. After investigating a robbery at Turing’s house, Turing’s behavior leads a suspicious police officer to dig into Alan’s past. All of a sudden, his sexuality comes back to haunt him. And it turns out, being a war hero might not be enough to save him from the homophobia of mid 20th century Britain.

Here’s what I loved about The Imitation Game. Apart from the amazing story, it’s not afraid to make Alan Turing a bit of a dick. And, while it doesn’t shy away from the discrimination he faced, it never uses it as an excuse either. The way he was treated was really, relay shitty. But you know what, Turing would have been a bit of an anti social dick anyway. It seems like one of the more warts and all biopics I’ve seen for a little while.

And even if he was a bit of dick, it’s only because he was human, and we’re all dicks sometimes. Which is something a lot of biopics forget, just because their subject did something noteworthy, or even selflessly altruistic. And even if Turing hadn’t played a major part in defeating the Nazis and winning the war, even if he was just a regular Joe, a movie tribute like this is the absolute, very least he deserves after what his government did to him in later life. And I guess that anger it fuelled that kind of anger in me is a sign of just how good The imitation Game is.