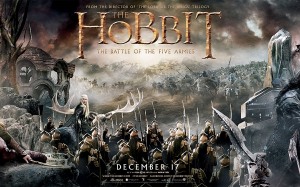 “You started this, you will forgive me if I finish it!”


When I got to the end of the previous entry in the series, The Desolation of Smaug, I remembered the book and realised there was only one small section of it left, and it’s that one small section the supplies the subtitle of this third, and final entry, The Hobbit: The Battle of the Five Armies.

When we last left these characters, the hobbit Bilbo (Martin Freeman), and his dwarf mates, lead by Thorin Oakenshield (Richard Armitage) had found the Lonely Mountain and the masses of gold inside. Waking the dragon Smaug (voiced by Benedict Cumberbatch), they inadvertently inspired said dragon to attack the nearby Lake Town. The Battle of the Five Armies kicks off at this point, with Lake Town in flames and local archery enthusiast Bard (Luke Evans), taking the dragon out. Yep, the big bad guy who has been built up as the ultimate enemy of our heroes, is killed in the first five minutes.

But was Smaug the enemy? Or has the real enemy been inside the heroes all along? Is the real enemy… Greed??? Yes. Yes it is. And Peter Jackson makes sure to blatantly tell us that, over and over and over again. So, as word of Smaug’s death spreads across Middle Earth, armies of men, elves, orkes and dwarves make their way to the Lonely Mountain to get their cut of the gold inside.

Bloated and overblown has been the fear about this series ever since its multiple movie format was announced. And bloated and overblown is exactly what the Hobbit trilogy has been, and especially The Battle of the Five Armies. I think, ultimately, The Hobbit is a victim of the The Lord of the Rings’ success, being such an artistic, critical and financial hit. But The Lord of the Rings was an epic series of movies, telling an epic story, adapted from three novels totaling over 1,000 pages long. The copy of The Hobbit on my bookshelf is a small, sweet, kids’ story that clocks in at just 285 pages. And when you try to make a small, sweet, 285 page kids’ story epic, you end up with bloated and overblown. You also end up with three kind of OK movies that should have been one really great one.