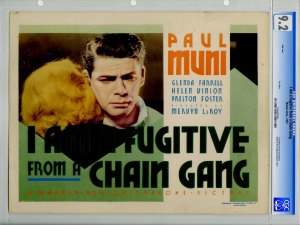 “There are no musts in my life. I’m free, white and twenty-one.”

According to the pop culture history lessons I’ve received through TV and movies over the last three decades, soldiers returning home from the Vietnam War were the first American veterans to not got the hero treatment. Turns out, I was wrong. Turns out, the returning US servicemen of the WWI didn’t exactly have a red carpet waiting for them either. Turns out America in general in the 20s wasn’t the most socially conscious place in the world. And, most surprisingly, it turns out that Hollywood was more open to criticising that in the 30s than I ever would have given it credit for. All that is to say, I think I just got a pretty great history lesson with I Am a Fugitive From a Chain Gang.


The First World War has just ended, and American soldiers are returning home to a not so prosperous homeland. Jobs are in short supply, ex servicemen, like James Allen (Paul Mini) struggle to find their place in a country that seems to have moved on without them while they we refighting in Europe.

With some pretty impressive engineering skills learned in the service, James is understandably reluctant to take a low skill, menial factory job, and sets off around the country, looking for work, finding only rejection. After a few months and a few thousand miles riding the rails, he ends up flat broke in a diner, hoping for a free meal. When another customer robs the diner at gunpoint, James is inadvertently caught up in the mayhem and convicted of attempted robbery.

In an unnamed southern state, he’s sentenced to a few years hard labour, working on a chain gang. Proving too much for an innocent man to take, James escapes and manages to build a new life for himself. But no amount of professional or personal success can eliminate the ever present fear of being discovered and sent back to serve out his time.

A surprisingly direct attack on the authority system of the time, I Am a Fugitive From a Chain Gang is the kind of early Hollywood movie that I assume helped give rise to the assumption that Hollywood is a lefty, liberal propaganda machine, always pushing the ant-conservative agenda. And if it was trying to get a reaction from the right, it worked.

According to the IMDB Trivia page for I’m a Fugitive, “Even though Georgia was never specifically named in the film, numerous lawsuits were filed against the studio, the film was banned in Georgia, and the studio’s head and the film’s director were told that should they ever find themselves in Georgia they would be treated to a dose of the ‘social evil’ they so roundly denounced.”

If I’m a Fugitive From a Chain Gang did help give rise the assumption that Hollywood is lefty, liberal propaganda machine, always pushing the ant-conservative agenda, that’s a pretty great legacy for a movie to have.

I Am a Fugitive From a Chain Gang
Directed By – Mervyn LeRoy
Written By – Howard J. Green, Brown Holmes,  Sheridan Gibney