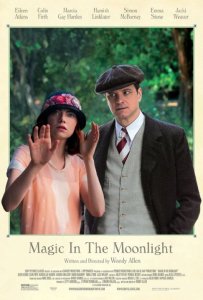 “When the heart rules the head, disaster follows.”

Woody Allen has a pretty steady routine these days. He pops out a movie every year or so. About every third or fourth one gets decent critical reaction and box office, and the others get dismissed as slight and inessential. But I tend to like them all. Sure, Blue Jasmine is more substantial and packs more of an emotional punch than something like To Rome With Love. But that doesn’t mean I was any less entertained by the latter. After the Oscar success and general raves for Blue Jasmine, it was inevitable that its follow up would be dismissed and overlooked. And that’s a shame, because Magic in the Moonlight is Allen at his whimsical, silly (not quite) best.


It’s 1928 and on stage, Chinese magician Wei Ling Soo wows audiences with his disappearing elephant and other magic tricks. Off stage and out of makeup, he’s stuffy, cynical and sceptical Englishman, Stanley (Colin Firth). Recruited by his lifelong friend and fellow magician, Howard (Simon McBurney) to debunk a clairvoyant, Stanley heads to the South of France. When he arrives, he meets the target of his proposed debunking, Sophie (Emma Stone).

Stanley’s entire life is based on logic, science and finding practical reasons, excuses and explanations for every aspect of it. At first, he thinks Sophie is a cheap charlatan, looking for nothing more than a rich man to marry. But the more she seems to know about him, the more Stanley starts to question his every idea about life, and believe that Sophie may just be the real thing.

The south of France setting, the almost-screw ball approach to the story, the silliness that ensues when opposites attract, Magic in the Moonlight is pure fluff, and Allen executes in perfectly. The bright colours, the gorgeous outdoor locations, the easy life and social graces that came with class and privilege in the 20s. This is pure escapism executed by an expert director and expert cast (including Jacki Weaver and Marcia Gay Harden).

Woody Allen is a cynical film maker and story teller. The worlds he builds are full of hapless characters who can’t catch a break. Even at his silliest, there’s still a dark streak of despair and hopelessness to a lot of his work. And it’s that back catalogue that makes Magic in the Moonlight such a great surprise.

Here is a story built entirely on cynicism. Built around a central character who refuses to believe in things like fate, destiny and even love. Yet, Stanley gets to become one of Allen’s most idealistic and optimistic characters. Not only that, he actually gets rewarded for his optimism. After almost 50 years and about as many movies, Magic in the Moonlight isn’t just a pretty good movie, it’s a great sign that Allen still has plenty of new things to say and do.