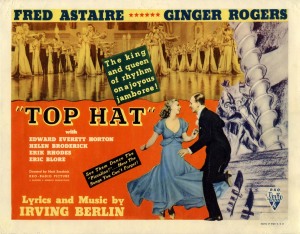 “In dealing with a girl or horse, one just let’s nature take its course.”

I love discovering old movies that I didn’t even realise were classics until I watched them. No one stumbles across Citizen Cane, or Vertigo, or The Wizard of Oz. Those movies are too famously classic to be seen by mistake or luck. I also love discovering why a certain director, actor, or combination of actors are considered Hollywood legends. Fred Astaire and Ginger Rogers were such an iconic screen duo, I knew who they were before I knew who they were. By that, I mean Looney Tunes cartoons meant I recognised them even though I had no idea what those cartoons were spoofing. With Top Hat, I get the lot. A classic I’d never heard of, full of shots and dance numbers I know I recognise. And immediate proof of why I knew “Fred and Ginger” long before I actually knew who they were.


Flying to London to star in a West End musical, Jerry (Fred Astaire) stays with the producer of the musical, Edward Everett Horton as Horace. On his first night, Jerry is tap dancing around Horace’s apartment which leads to a complaint from the woman in the apartment below. That woman just so happens to be the gorgeous and charming Dale (Ginger Rogers). Jerry is infatuated and although initially annoyed by him, it doesn’t take too long for Dale to start to feel the same way. The only problem is, this is a screwball comedy, so we’re gonna need some mistaken identity to get in the way. Which arises early on as Dale thinks Jerry is in fact Horace. And since Dale is friends with Horace’s wife, she’s more than just a little conflicted about her undeniable attraction.

This might seem obvious to say about a Fred Astaire movie, but Top Hat is at its best whenever he’s in motion.   But I don’t just mean the big dance numbers. They are amazing and Astaire really does make them so much more than just old Hollywood hoofing. By ‘in motion’, I mean pretty much any and every time he moves in any way. Astaire has so much control over his body, and such a natural command over movement in general, he can turn something as simple as reading a newspaper into slapstick gold.

I know a lot of standard visual tricks and tropes of cinema that we still see today had been well and truly established as early as the silent era, but I still get surprised when I see real visual flair in a movie with the vintage of something like Top Hat. Clever matching shots to go from one scene or the next, or little reveals that can make an OK joke really funny. I know Top Hat didn’t invent them, but it’s still great seeing them employed so expertly in an 80 year old movie.

The plot is paper thin, the acting can be more than hammy at times and the song and dance numbers are shoe horned with little to no attempt to make them feel organic to the people, story or situations. But none of that stops Top Hat from being totally engaging, totally entertaining and totally charming every single second.