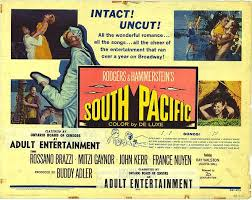 “It is a common mistake for boys of your age and athletic ability to underestimate men who have reached their maturity. Young women frequently find older men attractive, strange as it may seem.”

Some movie titles are so iconic and engrained in my mind, I assume I’ve seen them before. Or even when I know I haven’t seen them, I assume I at least know what they’re about, what to expect. It was only recently I realised I had never seen South Pacific. It seems like one of those classics I would have caught as a Saturday afternoon movie on telly when I was a kid. Not only had I never seen it before, watching South Pacific for the first time made me realise I knew nothing about its story, apart from its setting.


It’s the Second World War, and while American troops are going through hell in Europe, things against Japan in the Pacific haven’t quite kicked off yet. Bored and secluded on a tropical island, Navy men, lead by Luther Billis (Ray Walston, AKA, My Favourite Martian) kill time trading souvenirs with local islander “Bloody” Mary (Juanita Hall) and ogling the military nurses, represented mainly by Mitzi Gaynor as Nellie. A real mission comes to the island in the form of Lt. Joseph Cable (John Kerr).

Tasked with hiding out on a neighbouring island to covertly gather intel about the enemy Japanese, Cable needs a local who knows the area. And by a local’’, I mean a French plantation owner (Rossano Brazzi as Emile De Becque), who fled France after a killing a dude. But that’s OK, because now he’s rich, handsome, knocked up a local island girl who’s now dead, and is balls’ deep in winning the heart of Nurse Nellie.

That probably sounds messy and all over the shop with a lot of disparate characters and stories, but they all intertwine just enough to hold South Pacific together. Billis has an obvious crush on Nellie, which brings him into the orbit of the froggie Emile. “Bloody” Mary (a pretty offensive collection of slapped together racial laziness) decides Cable is the perfect match for a local island girl, connecting his character to the Mary literally, and to Emile thematically though their romancing of younger, culturally different women.

Oh, did I mention South Pacific is a musical? Not just any musical, it’s the musical responsible for some of the most well know show tunes in musical history. I’m basing that claim on the fact that I recognised them, and I have seen very little in the way of stage or movie musicals. Songs like There is Nothing Like a Dame, I’m Gonna Wash That Man Right Outta My Hair and Some Enchanted Evening are amazing and have lost none of their greatness in the years since this movie was made.

Which only makes the clunkers on this soundtrack even clunkier. Apart from the above classics, most of the other songs sound like the vocal melodies and lyrics were made up on the spot as the singers heard the music for the first time.

The other major downfall of South Pacific is its direction. Or, more specifically, its lack of direction. The island locations are gorgeous, the actors are all pretty great, and some of the songs are too. But it’s like director, Joshua Logan, thought that was more than enough, so he decided to just plop his camera on a tripod in front of them and hope for the best.

The setup scenes of South Pacific had me pumped for a war movie, all about Cable’s covert mission amongst the enemy, with a few songs thrown in here and there. But that plot is pretty much abandoned 10 minutes in, and forgotten until about 10 minutes before the end. In between, it’s a whole lot of the kind of musical schlock that gives musicals a bad name. Yet, there’s just enough good stuff peppered throughout to make me glad I’ve seen South Pacific. Even though I’m pretty sure I’ll never watch it again.