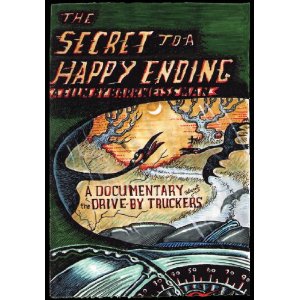 For most of my life, country music seemed like the least appealing genre of music ever committed to tape. Then I found a band called Drive-By Truckers and realised that country music can be kind of amazing. For 25 odd years now, they’ve been plugging away, building an ever growing following and getting more and more successful. It’s that slow and steady rise that makes the Drive-By Truckers story such a great one to tell with The Secret to a Happy Ending.


Focusing mainly on singers and guitarists Patterson Hood, Mike Cooley and Jason Isbell, it’s a history lesson on the band, how they came to be and the ups and downs along the way, leading up to the firing of Isbell. Sometimes, seeing how art is made can take some of the magic and mystery out of it, but the southern story telling charm of every Trucker means this look behind the curtain gives their songs even more dimension.

There’s a running theme throughout The Secret to a Happy Ending regarding the implausibility of Drive-By Truckers ever being a successful band. Patterson Hood and Mike Cooley were both pushing 40 when they formed, Jason Isbell was barley 20. When Isbell was in the band, that meant there were three guitarists, all writing their own songs, all somehow meshing together to make this weird combination of southern rock and country. Hood even says that on paper, their band shouldn’t work. The fact that it does work, and that their music seems to only be getting better is what makes them such an entertaining subject for a documentary

As a fan of the band, I was predisposed to liking The Secret to a Happy Ending, but I don’t think that’s the only reason I dug it so much. These are interesting people with interesting stories to tell. And when you add to that the amazing music they make, what’s not to love?


The Secret to a Happy Ending is kind of a puff piece, but when you’re on board with the subject, a puff piece can be pretty great. Drive-By Truckers is band that I like more and more every single day, so watching a 90 minute gush fest about these guys was exactly what I wanted from this movie.

But more than just a puff piece, it’s a fascinating look at what it means to be born and bred in the American south. There’s a lot to be ashamed of in their heritage from generations past, but there’s a lot to be proud of at the same time. And Patterson Hood, Mike Cooley and Jason Isbell are amazing at telling the stories about that shame and pride. Or as Hood calls it, ‘the duality of the southern thing’.

It’s also a great look at what it means to be a traditional, hard working live band of real substance, in an era when platinum selling artists seem more disposable than ever. They’re a hard working, hard rocking, hard parting band who has prided themselves on doing everything the hard way. The Secret to a Happy Ending was made when that hard work was finally starting to really pay off in a big way. With the hindsight of the success I know they’ve found in the years since (Isbell as a solo artist), it makes this Cinderella story all the more satisfying.

The Secret to a Happy Ending
Directed By – Barr Weissman