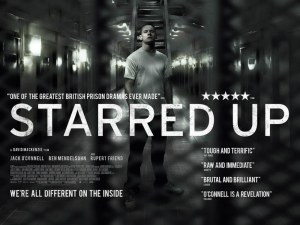 “I’m just saying. Say this therapy goes well and it changes my life and I rehabilitate. And then you lay it on for the next geezer and it works for him, and the next. And everything’s sweet yeah? Crime rates starts to come down, police got less people to nick, courts got less people to convict. Pretty soon you’re out of a job.”

Movie escapism doesn’t have to be about crazy sci-fi, or magical fantasy, or even wish fulfillment of luxuries generally unavailable to us in the real world. Sometimes, movie escapism is about experiencing the absolute worst of what could actually happen to us, in the real world, if things took a turn for the worst. Like, what if you grew up with a violent criminal for a father who had been in jail since your were a kid? What if you were forced to grow up on the same violent streets that turned him that way, and the only way to survive was to retaliate with even more violence? What if that was the only world you knew, and jail times wasn’t just a possibility, but an inevitability? That is the world of Starred Up.


To be “starred up” means that despite being a minor, your crimes on the outside, and behavior in the inside, have been so bad, you’re getting moved up from juvenile detention to the big leagues of adult prison. Which is exactly what happens to Eric Love (Jack O’Connell). Once in gen pop, he’s immediately under the protection of his prisoner father, Ben Mendelsohn as Neville Love. Neville might not be the leader of the prisoners, but he’s certainly someone not to be messed with, and has obviously earned the respect and/or fear of everyone there, criminal and guard alike.

With his father torn between making Eric the kind of prison hard man he needs to be to survive, while also wanting him to behave well enough to one day be released, Eric finds a much more positive influence in Oliver (Rupert Friend), a psychologist working with prisoners to help rehabilitate them. That might sound pretty hacky and clichéd, but the combo of O’Connell, Mendelsohn and Friend makes this conflicting triangle more than believable and amazingly compelling. Despite Eric’s deplorable actions, Oliver’s glass half full belief in the general goodness of people is hard to resist.

Ben Mendelsohn is amazing, but I think at this stage in his career, that’s kind of expected. Rupert Friend makes what could have been a one note, bleeding heart character seem real with relatable and believable motivations. But Starred Up belongs to Jack O’Connell in the central role. Looking at his IMDB, he’s done a lot of Brit TV, but nothing of real note (if you’re a fan of Skins, I’m sure that dismissal made you angry, but I could never get into that show), so with this first real chance at something big, something (that should be) career making, he swings big and connects in every way.

Starred Up… Come for the always entertaining cockney slang and British hard man swagger, stay for some of the best performances delivered on film in the last few years.

Starred Up
Directed By – David Mackenzie
Written By – Jonathan Asser