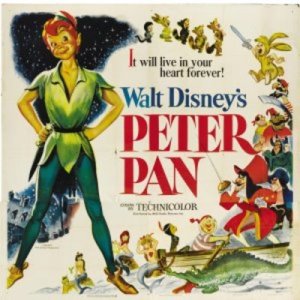 “All this has happened before, and it will all happen again. But this time it happened in London.”

Sometimes there’s a story that’s so engrained in culture, so well known, told so many times, I just assume I’ve seen it, read it, or otherwise somehow know it. Then all of a sudden, I realise that I may have only seen bits and pieces, read about it, or just know the broad strokes of the story without every actually getting into it properly. That’s certainly the case with the story of Peter Pan. As many clips as I’ve seen from various versions, or the half dozen times I’ve seen Spielberg’s spin off / sequel Hook, it wasn’t until today that I actually experienced the original story in its entirety for the first time, via Disney’s animated Peter Pan from 1953.


Wendy, John and Michael are three kids living in London. Each night, Wendy tells her younger brothers stories of the legendary Peter Pan, the flying boy who never grew up, and who lives in the magical place of Neverland with his group of lost boys. On her last night sharing the nursery with her brothers, before officially growing up, the actual Peter Pan reveals himself to be real and takes the three Londoners to Neverland.

Once in Neverland, Peter’s obvious affection for Wendy leads to jealousy from his fairy friend Tinkerbell, as well as his haram of buxom mermaids. While bitches be crazy, John and Michael go on a mission fighting Indians with the lost boys. All the while, Peter’s arch enemy, Captain Hook, is devising ways to get revenge for the hand Peter liberated from him in an earlier skirmish.

A story about growing up, or more importantly, accepting that you’re growing up, Peter Pan isn’t subtle about its message. Captain Hook has to move on and get past his thirst for revenge before it consumes him. John and Michael have to accept that they’re all growing up, and just like Wendy, they too will have to leave the nursery eventually. And Peter? Well Peter has to learn that his carefree life is pure selfishness and comes at the expense of everyone else around him.

Disney movies have never shied away from dumping some pretty heavy material on kids, and Peter Pan is no different. There’s a lot of talk of slit throats, some pretty racist depictions of Native Americans and the thematic undertones are far from frivolous cartoon kids’ stuff. But in one way, it’s a lot more tame than your average Disney animated movie from this period. John, Michael and Wendy come from a pretty stable home life. They have two parents when the movie starts and neither dies or disappears before it’s over. That’s surprisingly chipper for this era from this studio.

With hardly any songs, such a lively main character and a 75 minute running time, Peter Pan is one of the sprightlier Disney movies from the period. There’s no sappy romance, no tragic inciting event, not death, and not even all that much threat. Captain Hook has his moments, but there’s never and real concern that’s he’s any sort of match for Peter. When so many other Disney animated movies layer on the tragedy, Peter Pan is optimistic fluff that I can imagine being much more watchable for kids than something like Sleeping Beauty or Cinderella. Or maybe it was just way more watchable to me.