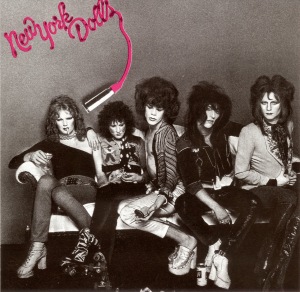 New York Dolls is a funny one. They’re a band I’ve never been able to get a hold of. Are they glam heavy rockers, the harbinger of bands like Motley Crue and Poison? Are the post punkers adding a little fabulous flare? Are they a bit of a joke, gimmick band, dressing up in silly costumes and doing an exaggerated impression of glam? Or are they…

Like track one Personality Crisis, Looking for a Kiss and Vietnamese Baby also sound like they’re taken from a musical. A terrible musical written by 70 year old theatre veterans, trying to write songs that sound like the rock and roll music the kids like so damn much.

Bad Girl and Pills are kinda cool, I guess. Not cool enough to bother elaborating on. But if someone tried to tell me these songs are great, I wouldn’t immediately cut off all contact with that person.

I complain a lot in these reviews about musicians who take themselves too seriously, but I also hate it when everything’s a big joke. I know it’s picky, and I know it’s probably me just changing the rules to suit my own disgruntled negativity. But when a band seems like they don’t even believe in what they’re doing, what reason are they giving me to give a shit? I guess I like bands who take themselves seriously, but don’t see themselves as the source of some important message we all need to heed.

New York Dolls makes me put New York Dolls in the same drawer as The Darkness or Steel Panther. It’s way too slight to take seriously or give any real credence to. But the odd song here or there can be a pleasant enough distraction. The idea of an entire album from The Darkness seems less essential than a kick in the nuts. But I still hum along when I Believe in a Thing Called Love comes on the radio.