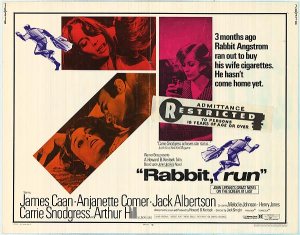 “I once did something right. I played first-rate basketball. I really did. And after you’re first-rate at something, no matter what, it kind of takes the kick out of being second-rate.”

Adapting a novel can’t be easy. The writer has the luxury of hundreds of pages and ten of thousands of words. The screenwriter has to condense the same story into a fraction of that. With a novel, every single reader imagines their own version of how the characters and settings look, how they sound and interact. The director has their own vision too, so it’s always going to be different to how the majority of readers imagined. And if a book is successful enough to be made into a movie, it’s probably pretty beloved with a reputation difficult to live up to. An example of all of these obstacles being too much to overcome, is the 1970 movie adaptation of John Updike’s novel, Rabbit, Run.


Harry ‘Rabbit’ Angstrom, played by James Caan, is an ex high school basketball star and current terrible husband and father. With a two year old son and heavily pregnant wife, Janice (Carrie Snodgress), Rabbit is so overwhelmed, he runs and shacks up with a woman on the wrong side of the tracks, Ruth (Anjanette Comer).

Soon, his in-laws put their priest, Jack Eccles (Arthur Hill), on the case to bring Rabbit back to his senses. But immediately, like everyone else he comes in contact with, Eccles too is under Rabbit’s spell, wanting to impress him more than lead him to salvation.

And here’s the biggest problem with Rabbit, Run the movie. In the book, Updike made me believe all these people couldn’t help being sucked into Rabbit’s selfish orbit. But Updike also somehow made me realise what an asshole Rabbit really is. He constantly uses people and takes as much advantage as possible, while convincing himself he’s the victim. Whereas the movie version never takes enough time to explore what a dick Rabbit really is.

Maybe Caan didn’t play it desperate enough, maybe all the stuff left out from the novel is the stuff that made the complicated nature of his character work so much better on paper. Maybe it’s just not a very good movie. But even the horribly tragic event in Rabbit, Run’s final act doesn’t really hit in the movie. I just didn’t hate the movie version of Rabbit enough.

The other downside is the acting. Apart from Caan in the central role, everyone else around him is kind of bad. Snograss’ drunk acting is really on the nose. And all four older actors playing Harry’s parents and in-laws seem like they came straight out of a local amateur theatre society.

The worst part is, Updike’s books based on the character only getter better. But I assume the dodginess of this move is a big reason why the others have never had their crack at the silver screen. Not that these sorts of characters traditionally get the franchise treatment anyway, but watching an aging Harry Angstom in well made movie adaptations would have been amazing.