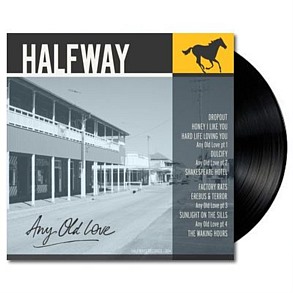 I don’t think I’m alone in dismissing country music for a long time based on what I assumed it to be, rather than ever really giving it a chance.  I also don’t think I’m alone in finally giving it a chance for superficial, hipster reasons because the cool kids told me I should like Ryan Adams and Wilco.  And while those hipster, cool kid recommendations lead to me kind of appreciating Adams and really loving Wilco, they more importantly taught me that like any genre, shitty music or great music is just that, no matter what genre name you give it.


For every clichéd, hacky, cheap country music convention, there’s a dozen uniquely amazing genre tricks and tropes that mean country can get away with certain things other genres never could.  So to further embrace my entirely too recent appreciation for this much maligned musical style, I thought I’d stay Australian and stay modern, with Brisbane’s Halfway, and their most recent album, Any Old Love.

The first thing to strike me with this album, and its opening track Dropout, is the musicianship and song writing on display.  The greatest thing about punk rock is the fact that musical ability is kind of low on the list of requirements to make interesting music.  The greatest thing about country is that there’s nowhere to hide mediocre playing, singing or writing.  Only the absolute best make it through the fray, which is why you get songs like Dropout (and the rest of Any Old Love, for that matter) where the music is flawless, while  never robotic or artificial.  You can hear the real people behind the pristine execution.

When in full flight, Halfway take full advantage of their eight piece ensemble to make a wall of raucous, country rock sound.  But they also nail it when they strip things back for something like Shakespeare Hotel, with plenty of layers, but restrained in a way that builds to make an almost sparse cacophony.

With Factory Rats, they make unapologetic, nostalgic classic rock.  Using the same kind of ingredients that Bryan Adams would turn into painful, radio overloading syrup, Halfway produce something more like Springsteen at his best, only made better with their small town, Central Queensland restraint.

Halfway really strips things back for the closing minutes, with Any Old Love Part 4 and The Waking Hours.  The kinds of songs that epitomise the concept of less is more.  When the writing is this tight and the lyrics this genuine, you don’t need anything more than an acoustic guitar, some well placed vocal harmonies and backing instruments so restrained, you hardly notice they’re there.

The first time I ever heard of Halfway was when they announced their name at the end of a spot supporting The Fauves at The Zoo in Brisbane a couple of years ago.  I’d walked in halfway (see what I did there?) through their set and quickly went from seeing them as the usual necessary annoyance of any support band, to actively loving everything they played that night.  The best thing about Any Old Love is that it loses none of that impact they had live that night at The Zoo.