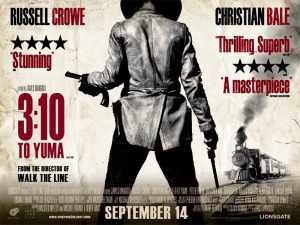 In 2005, director James Mangold made Walk the Line, the Johnny Cash biopic.  Before that he’d had a little success with Cop Land (a movie that is largely and unfairly forgotten now), plus pretty decent critical success and award recognition with Girl Interrupted.  But Walk the Line was the one that really made me take notice and learn his name so I could keep an eye on what he did next.  Then, what he did next seemed to be a bit of a flop and he slid off my radar of people to keep an eye on.  But with the death of Elmore Leonard, author of the source material, the title 3:10 to Yuma kept popping up.  So I finally got around to James Mangold’s supposedly disappointing follow up to Walk to Line.


Christian Bale is Dan Evans, a struggling rancher in in 1884 Arizona.  He’s being run off his land by a rival rancher who controls the water supply.  Russell Crowe is Ben Wade, a notorious outlaw who’s finally captured after robbing one stage coach too many.  In order to make desperately needed money, Evans signs on to escort Wade to Yuma, where he’ll be put on a train to face trial.

Along the way, the lawmen are more and more revealed to be the not so good guys.  And because Russell Crowe is the kind of actor who’s ego keeps him from ever playing an actual baddie, 3:10 to Yuma not only has to give him a redemption arc, it also has to give us, the audience, other legit villains we can all hate.  Such as the rancher running Bale off his land, who has the thankless job of delivering the line, “Sometimes a man has to be big enough to see how small he is”.  It’s the verbal equivalent of twirling a moustache.

But the dead horse flogging obviousness doesn’t stop there.  Limping on a Civil War injury, Evans is constantly questioned by his eldest son who thinks he’s a coward, and even though his wife (Gretchen Mol) is always completely supportive, we know Evans is trying to prove his manhood to her, his son and most importantly, to himself.  And just in case that still isn‘t obvious, Bale is given clunky dialogue to really hammer it home.  Clunky dialogue like “I’ve been standing on one leg for three goddam years, waiting for God to do me a favour”.

It’s easy to crap on Russell Crowe as a bit of a dick.  He constantly gives us all so much ammunition in his real life.  But when I see him in a movie, I’m, always reminded that he is a good, naturally charismatic actor.  He has a certain charm and cheeky glint in his eye that makes him really watchable.  Combine that with the intensity of Christian Bale, and you’ve got a more than serviceable modern Western.  It’s also pretty great to see an Aussie and a Pom in the lead roles of the most American of genres, and both nail it.

It does nothing to advance or add anything to the genre, and there are dozens better.  And sure, compared to Walk the Line, it’s kind of disappointing, but it’s a totally fine way to spend a couple of hours.  3:10 to Yuma just had the misfortune of coming so soon after its director’s break through and still current high water mark.