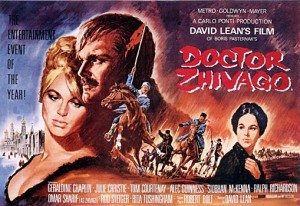 David Lean is a name I should probably be a lot more aware of than I am.  He’s made several of the most well regarded movies of all time, yet he’s not someone who’s filmography I can even name the highlights of.  But go to his IMDB, and it’s got some real heavy hitters on there, including Oliver Twist, The Bridge on the River Kwai and Lawrence of Arabia.  The last is shown semi regularly on the big screen at a classic old cinema in Melbourne and I know I need to see it that way.  But until I get around to that, I watched another of his massive scale productions, Doctor Zhivago.


Alec Guinness is Yevgraf, a KGB officer in Stalin’s 50s-ish Russia.  He tracks down (Hot n’ Spicy) Tonya (Rita Tushingham),a  young woman he believes to be his long lost niece, the daughter of his brother, Omar Sharif’s Yuri Zhivago.  In a series of flash backs told to his estranged daughter, the story of Doctor Yuri Zhivago unfolds.

As a young boy, he is orphaned and taken in by well to do friends of his dead mother.  Growing up alongside their daughter (Original Recipe) Tonya, Yuri studies to become a doctor in pre Bolshevic revolution Russia.  In his same neighbourhood are young revolutionary Pavel Pavlovich Antipov (Tom Courtenay), his girlfriend Lara Antipova (Julie Christie) and evil opportunist Victor Ipolitovich Komarovsky (Rod Steiger).

Over the course of several decades, Zhivago becomes a doctor, falls in love with his adopted sister Tonya, joins the revolutionary army, falls in love with Lara, but stays faithful, marries and has kids with Tonya in Moscow, flees to the country, finally has an affair with Lara, is kidnapped back into a different revolutionary army, deserts and braves the Russian winter to barley make it home alive, and all the while regularly comes up against Victor Komarovsky in different times and places to hate him in different ways.

Doctor Zhivago is elaborate, sprawling and long, but never boring, laboured or slow.  The almost three and half hours seems to race by, and even feels a little too short.  Even though the real love story is Yuri and Lara, I really would have liked a little more closure on the story Yuri’s wife Tonya and their legitimate children.

As a showcase of acting, Doctor Zhivago is really top notch stuff.  Sharif and Christie get the most screen time and are always compelling.  But the supporting cast is possibly even more impressive with what they do with their much more limited roles.  Steiger is an intimidating and terrifying bad guy.  Courtenay makes his evolution from idealistic student protestor to ruthless communist extremist believable every step of the way.  And Ralph Richardson as Yuri’s adoptive father, turned father in law steals every scene he’s in.

This movie represents a kind of epic that doesn’t exist anymore.  And it shows the difference between an epic and a blockbuster.  The kind of enormous budget, resources and production schedule needed to make Doctor Zhivago would never be devoted to such and adult story these days.  Movies with budgets like this in 2014 need to be a lot more easily digestible by 14 year old boys.