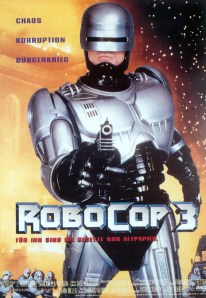 With movies like Starship Troopers and the original Robocop, director Paul Verhoeven showed how big, loud supposedly dumb action can be used to tell what is really a pretty smart, satirical story.  Robocop 3 is just like those movies, if you take away the smart satire.

As with every single movie about anything robotic as the central character, Robocop discovered he needed to embrace his humanity back in the original movie, so Robocop 3 needs to find away reset that a little and start fresh, so it can have an excuse to tell basically the same story all over again.  So within the first 20 minutes, he has some new programming put it that is supposed to wipe his brain of all those pesky emotions.  Luckily Anne Lewis (Nancy Allen), his partner from the first two movies, bites the big one early on and he’s back to his emotional self.

There’s some sort of evil corporation that has control over the city and is disguising their oppression of the poor and weak as doing what’s best for the city. Admittedly, I haven’t seen the other two movies since I was a kid, but isn’t that the basic plot of those too? Robocop 3 suffers from a problem pretty common when you get this deep into a franchise…  Upping the anti and trying to top whatever came before.  In this case, Robocop’s bad assery is confirmed in his first scene when he catches a bullet inches away from exploding his partner’s face.  I know I’m watching a sci-fi movie about a cyborg cop, but c’mon, at least try to make it a little plausible.  This time it’s not enough to shoot a gun out of dude’s hand, he has to keep shooting the gun so it stays in mid air, almost as if awkwardly hanging from fishing line.

And then there’s the one thing I remember from the trailers when the movie came out, Robocop flying.  I think the entire special effects budget must have been spent on the animation of the spacey tunnel that takes us through Robocop’s mind, because they certainly spent next to nothing on the flying effects.

Peter Weller was smart enough to avoid this one, so the titular cop combined with robotics is now played by Robert John Burke.  When you can’t get the actor who played the title role in the first two installments, maybe that’s a sign to give it a rest.  Sure he’s in a mask the whole time, but even as someone who hasn’t seen the first two movies in well over a decade, I could tell straight away it was a different dude.  At least they were smart enough to not go the Smokey and The Bandit III route and promote the sidekick to the starring roll, or else we could have ended up with Nancy Allen as Anne Lewis, Miss Robocop.

But there is an upside to Robocop 3.  It’s packed with actors who I’m sure I wouldn’t have recognised when it was made two decades ago, but have all gone on to great stuff since.  CCH Pounder from The Shield, Jeff Garlin from Curb Your Enthusiasm, Bradley Whitford from The West Wing, Daniel von Bargen (George’s boss Mr Kruger) from Seinfeld, News Radio,Boardwalk Empire, O Brother Where Art Though> and a thousand other TV shows and moves you’ve seen over the last 20 years.  So if the exposure they got form this movie had anything to do with their future success, Robocop 3 can consider its existence justified.

Also, you get to hear Rip Torn ask the power mad bad guy, “What, you gone war wacky?”  that’s kind of entertaining, I guess.