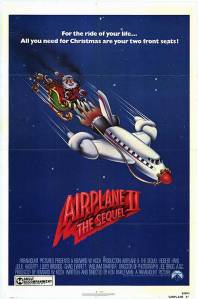 Airplane (AKA Flying High, for any Australian readers) is a true classic.  It’s a spoof so good, it’s now way more famous and more enduring than the air disaster movies it was parodying.  It’s also so good that it feels a little disrespectful to call it a ‘spoof’.  That word has been diluted so much by the Scary Movie level bullshit that gets crapped out today, that it has lost all positive meaning.  But in 1980, it meant something.  Too bad it also lead to such next level half assery two years later, with Airplane II: The Sequel.

Want a plot synopsis?  OK then, think about the first movie, replace the plane with a space shuttle, food poisoning with a sentient computer (a play on HAL from 2001: A Space Odyssey and there you have it, the plot for Airplane II.  Not content to just steal the plot beat by beat, The Sequel writer and director Ken Finkleman steals most of his jokes from the original too.  And I don’t just mean he steals the ideas of those jokes (well, he does plenty of that too) I mean he steals the actual footage from the original movie and finds ways to shoehorn it into his lazy, cheap knock off.

If you took away the jokes roughly copied from the first, and the jokes literally edited in from the first, the second movie has maybe a dozen new gags.  And of those, I’d say half are funny.  At least those five or six are legitimately funny.  When a nurse in a mental hospital turns around to show the back of her uniform emblazoned with, “I ♥ Sanity”, I laughed out loud.  When she then goes on to pull a car dipstick out of a patient’s mouth to check his oil, I really laughed out loud.  And if the day comes when a little old lady getting knocked over isn’t hilarious, I’ll stop watching comedies, because that is the day laughter itself has died.

While jokes like that would have fit in well with the original, too many of the new jokes are just too mean for this style of movie.  When a young boy takes over in the air control tower because he thinks he’s playing a video game, we see the crew inside the shuttle he’s controlling, seconds before he crashes it into tarmac, killing them all.  There are jokes about rape, murder and death.  I’m not saying these topics should be off limits in comedy, I’m saying they have nasty streak that just doesn’t fit with the silly world of this movie.

Even the best bits of Airplane II: The Sequel made me wonder why I was wasting my time with it, instead of just watching the original again.