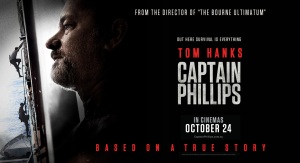 Paul Greengrass certainly has a thing for telling true stories.  He also has a thing for trying to give you both sides of the story and flesh out the bad guys as much as the good.  So much so, it’s always hard to think of them as simply bad guys by the time you get to the end.  Sure, they do bad, often horrendous things, but Greengrass is always sure we get to see at least some of what lead them to those terrible actions.  And that’s certainly the case with Captain Phillips.


It’s 2009, and Captain Richard Philips (Tom Hanks) is leaving on a merchant voyage around the horn of Africa.  The movie then cuts to Muse ‘Skinny’ (Barkhad Abdi), a Somali forced into piracy by some variety of local ass kicker.  With a crew of eager villagers, he hits the water in search of a big pay day.

There is very little setup and Greengrass keeps things moving at a cracking pace.  In no time at all, Hanks and his crew are at sea and spot the two small speed boats loaded up with dudes and machine guns on their tail.  This is a really intense sequence, and impressive too, when you see the ingenious, yet really simple and practical ways, Hanks and his crew fight of the invaders with no weapons.  But this can’t last forever, and eventually, the pirates board Hanks’ ship and take control.

But even knowing that, it never took the edge off this movie for me for a second.  At this stage, I feel like I’m in the swing of how Greengrass makes his movies.  But there’s something about them that still catches me a little off guars in the best possible way.  His version of shaky camera work, frenetic editing and visceral style makes all the cheap imitations just look like, well, cheap imitations.

We all know Tom Hanks is an amazing actor, but there are times in Captain Phillips when he really knocks it up a notch.  His final scene alone can take the credit for any Oscar attention he gets.  And that comes after two hours of watching him be fantastic.  But somehow, he finds a way to bring it home even stronger in those last few moments.

Captain Phillips is a great combination of story, director and performance to make what is possibly the most intense movie to come out this year.  And the fact that it’s out so soon after Gravity makes that impact even more impressive.