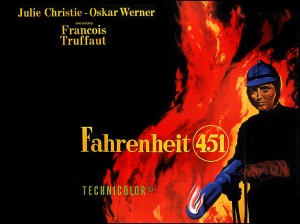 When someone watches Elysium in fifty years, will they think it’s a gritty, realistic, scary look at mankind’s possible future?  Or will it look like a cheap, corny, naive, laughable indication of how uncool the world was in 2013?  Because whenever I watch a movie from the 60s or 70s depicting the future, they seem less like a possible look at our future, and more like a collection of all the worst stylistic aspects of the time they were made.  Which is exactly what you get with the production design of Francois Truffaut’s Fahrenheit 451.


Based in no particular time in the future, Fahrenheit 451 is the story of Guy Montag, a fireman played by Oskar Werner.  Only in this version of the future, firemen don’t put out fires, because houses are now built using fire proof materials.  Instead, fireman go around burning books.  Not threatening or antiestablishment books either, they go around burning absolutely every book they find.  All printed texts are outlawed, although plenty of people still hide and cherish the odd volume, until they’re inevitably found and they’re books are subjected to Montag’s flame thrower.

The signs of Montag’s own disillusion with this world show early.  After receiving a promotion, he’s disappointed by his wife’s (Julie Christie) general obliviousness to his good news.  She’s too concerned with TV and popularity.  On the monorail ride home from work one day, he meets his neighbour, Clarisse, also played by Christie.  He immediately notices something different about her, and eventually is hoarding and reading his own collection of books under her influence.  Of course, his subversion of the status quo can’t go unnoticed forever and he’s eventually opposing the organisation he’s worked for seemingly his entire adult life.

This is a very serious movie.  Based on a novel written during the McCarthy era witch hunts, you could see it as a warning of the perils of censorship.  You could see it as an indictment of people’s obsession with TV, celebrity and popularity.  No matter what serious issue you think Fahrenheit 451 is tackling, the impact and edge are well and truly taken away by the goofy 1964 version of the future.  I know it’s easy to make fun of the production values and designs half a century later, but it’s impossible to look past them seeing this movie with 2013 eyes.

I’m no Truffaut expert, as far as I can remember, the only other movies of his I’ve seen are The 400 Blows and Day For Night, but when I think about those in comparison to Fahrenheit 451, and how great they are, I think it’s obvious that he was much more suited to character and reality based story telling than he was to high concept sci fi.